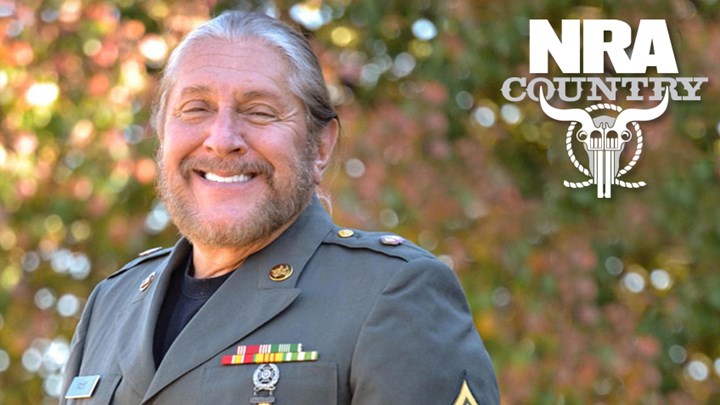 Music lovers—especially those in the South—know the Marshall Tucker Band for their definitive blend of rock, rhythm & blues, jazz, country and gospel. Lead singer Doug Gray and the band influenced major country acts like Alabama, Confederate Railroad and Travis Tritt and developed a 50-year friendship with NRA Life member Charlie Daniels. In fact, the Marshall Tucker Band was slated to tour with the Charlie Daniels Band in 2020 before the COVID-19 pandemic derailed those plans. Having earned the rank of an Army sergeant E-5 in Vietnam, Gray is quick to honor and recognize fellow veterans and understands the importance of the Second Amendment. Gray recently answered a few questions for NRA Country’s Vanessa Shahidi.

VS: The Marshall Tucker Band has traveled the country extensively. As you play to fans all across our nation, what makes you proud to be an American?
DG: We have the 2nd Amendment which gives us the right to defend ourselves against those who threaten our way of life. It’s our constitutional right. I’m very proud that people were smart enough to assemble our Constitution that still stands today. It’s the fabric that holds us together.

VS: Do you have a favorite personal firearm?
DG: I’m a fan of a variety of firearms and own several handguns.

VS: Who taught you how to shoot?
DG: My uncle Bobby, my mother’s brother. I was 10 years old living in Spartanburg, S.C. He helped me to understand how to shoot and maintain firearms. He and my Uncle Carl really taught me the ropes of the great outdoors!

VS: What’s ahead for you and the band?
DG: The Marshall Tucker Band’s mission is to play for our fans. We can’t wait for the pandemic restrictions to be lifted so we can hit the road again. We have many dates in the works. In the meantime, we’re busy preparing our buses and trucks to again see the world.

Be sure to catch all the news and announcements about Doug Gray and the Marshall Tucker Band online at MarshallTucker.com.

NRA Country is a lifestyle and a bond between the country music community and hard-working Americans everywhere. It’s powered by pride, freedom, love of country, respect for the military and the responsibilities of protecting the great American life. Visit nracountry.com, follow us on Facebook facebook.com/nracountry, Twitter @NRACountry, and NRA_Country on Instagram